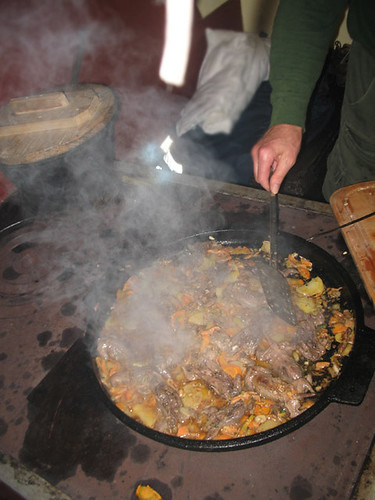 Over the weekend was the third time I joined some friends for their annual early autumn polhanje outing, but it was the first time some were actually trapped in my presence, and my first time ever to enjoy these gamey little rodents.

Polh (if Slovenian doesn’t easily roll off of your tongue, try “Poe” as in Edgar Allan, forget the “l” and add a soft “h” as in “hiss”) is Slovenian for the fat dormouse, or Glis glis, a species fairly common from Spain to western Russia. They look like small gray squirrels, but with big dark sexy eyes and long brooding tails.

Some consider Glis glis a delicacy, a tradition dating back to the days of the Roman empire when they were raised and fattened in captivity, and sometimes even used as food reserves for the emperor’s legions when they hit the road to rape, pillage and plunder.

They’ve been hunted in Slovenia for centuries, a practice first mentioned in 1240. Folk tales claimed that the little night-riding critters were shepherded by the devil himself [a picture as proof!], and are considered important enough in Slovenian culture that a museum was created in 1980 [link, in Slovenian].  Hunting is allowed after October 1, when they predictably become, as Dumas wrote in The Count of Monte Cristo, “fat as a dormouse.”

What do they taste like? Well, no, these little varmints taste nothing like chicken. Gamey, to be sure, with a strong almost musky aroma, but that can be easily remedied depending on how they’re prepared. Ours were sautéed in a large cast iron skillet on a big woodburning stove, with onions, potatoes, carrots, some mild peppers, and a handful of other spices, and (my only suggestion) some red wine. We used Refosk.

They also reminded me of the few times I’ve had iguana, but that had less to do with taste than it did frustration. They’re small and boney, leaving a small stockpile of bones floating in your stew. I’ve never tried sautéed or stewed hamster, gerbil, guinea pig or any other rodent, but logic would dictate that the tastes are probably similar. And apparently some chefs in Calabria would agree.