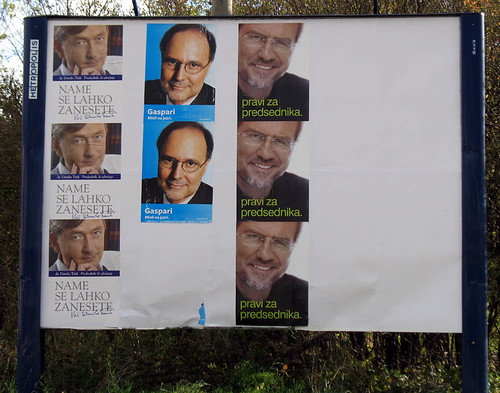 As I type, Slovenians are electing their third president in the fourth presidential election since independence in 1991. Most media pundits have described the campaign as rather boring. From the few televized debates I’ve watched, I tend to agree.

As in many parliamentary systems, the Presidency here is a largely ceremonial post, but the head of state can –and current president Janez Drnovšek certainly has– generate headlines (link to Nov 2006 Times of London profile.)

Here’s a pic of the leading three candidates from the field of seven –from left, Danilo Turk, Mitja Gaspari, Lojze Peterle– sharing the same billboard. (Isn’t that sweet?) All officially independent, Turk and Gaspari have the support of center-left groups and parties, and Peterle, from the center-right. A 50% majority is needed, so a second round on 11 November is all but expected.

Pengovsky, my chief source for all things political in Slovenia, has a concise run-down on precisely what powers the president wields.