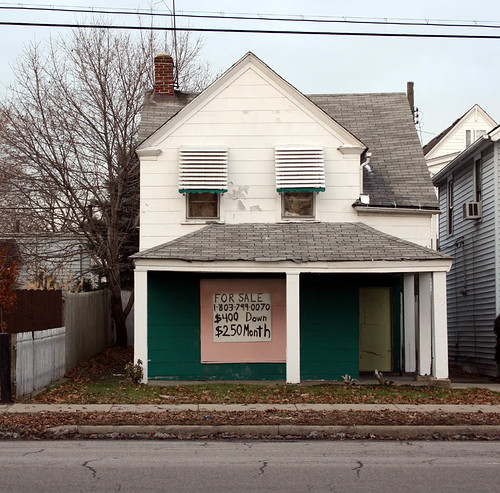 Another souvenir from my holiday visit to the U.S.

This is on Lake Shore Boulevard on Cleveland’s east side, a short stroll from the shores of Lake Erie.

Ohio was one of the states hardest hit in the subprime loan meltdown these past few years. According to a NY Times story,

Last year, there were 1.2 million foreclosure filings in the United States, up 42 percent from 2005, according to RealtyTrac, a firm that analyzes such data. At current rates so far this year, RealtyTrac expects foreclosure filings to hit two million in 2007, or roughly one per 62 American households — a rate approaching heights not seen since the Great Depression.

And things will certainly get worse.

“We’ll see another fairly big spike in (foreclosure) filings in early ’08,” Sharga projects. “Then there’s another group of loans that’s due to reset in May and June, so we’ll see another wave of defaults probably in the fall.”

With so many houses sitting empty, local tax bases are eroding, and will likely erode further as property values are being reassessed downwards.

$400 down, originally uploaded by pirano.