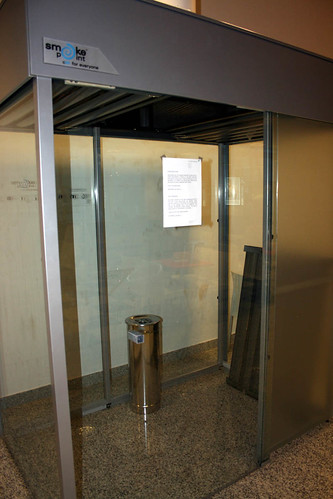 As part of its rennovation and expansion last year, a few of these smoking booths, similar to cages at circus sideshows, were installed near the new departure gates at Ljubljana’s airport.

But they can’t be used. At least not on Sunday afternoon the 13th. The news didn’t go over well with a few travellers, particularly those I told that a spot was indeed available inside to light up just prior to their flight.

I’ve resigned myself to the fact that many international airports –massive compounds like Chicago O’Hare, London Heathrow, Frankfurt, Brussels, etc– have decided against setting aside a few dozen square meters for smokers. And that enjoying a smoke between connections will for the rest of my life involve security checks and removing my shoes. No big deal. There are more important things to get upset about.

It would be nice though if Ljubljana’s connection to the world would at least decide what it was going to do. It would have been even better if they had decided before they wasted money on few of these booths.