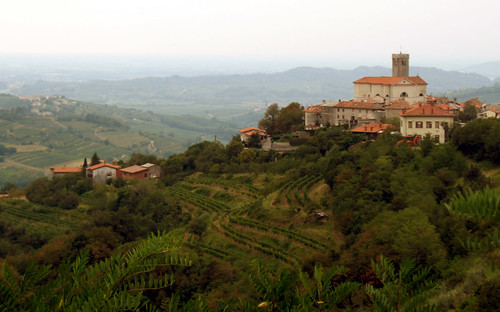 Nice feature article in yesterday’s LA Times, a generally positive overview of a handful of Slovenian wines that are making their way onto the menus of the trendiest of restaurants. (I shouldn’t fault the writer too much for this wildly off the mark remark — “When the region emerged from Soviet control in 1991 …”– but I will. They really should know better.)

Food and wine critics at the Times were impressed enough with a recent blind tasting to give nine Slovenian wines additional ink, also in the 30-Jan edition.

Three of the nine mentioned were from Movia, Slovenia’s most widely known producer in the rest of the world, but it was nice to see mention of some internationally lesser-known varietals, such as Pinela, Ribolla (rebula in SLO), and Refosco (refošk is SLO).

“There are strong parallels between Slovenia and Burgundy,” says London-based wine expert Jancis Robinson. Fresh from her first trip to Slovenia, Robinson is optimistic about the potential of Slovenian wines. “This is a land of small domains run by youngish, determined winemakers who also tend their vines themselves,” she says.

“They are quite anarchic and individual in their use of oak and, to my mind, are making more distinctive wines than most of their neighbors in [Italy’s] Friuli.”