Bank of Slovenia (LJ Pic of the Day) 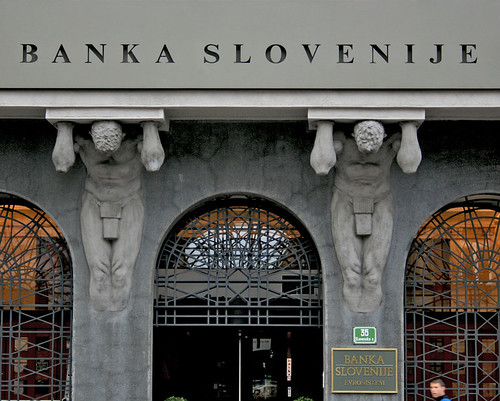 This is Slovenia’s Central Bank.

With its four telamones (two pictured) carrying the weight it’s the perfect metaphor for the soon-to-be-socialized U.S. economic system, don’t you think?

Maybe a few hundred extra billion dollars can be tossed into the bailout plan to add a telamone or two to the foundation of every U.S. bank and lending institution. You know, to emphasize what John McCain calls the “fundamentals of the economy”. It can’t hurt. For starters, like the Public Works of Art Project (PWAP) in Roosevelt’s New Deal in the 1930s, it would immediately provide jobs for thousands of under- and unemployed American sculptors. In troubled times, it’s best to keep those who work with strong hammers and sharp chisels happy and busy.

Kids could get involved too! Each elementary school grade in the U.S. could adopt a neighborhood bank’s telamone. Dress it up for Halloween. Decorate it for Christmas. Sings songs to it on May Day to finally bring the May 1 holiday home where it belongs. The possibilities really are endless.

The McCain campaign could use a few telamones right now after the weekend bailout debacle, by the way. After suspending his campaign without really suspending it so he could strike a telamone pose during a photo op, he sat quietly during a White House meeting, called House Republicans to garner support for the package, and then his campaign took the credit for delivering those votes. Only problem was that the package didn’t pass.

But back to the bank. Sitting on Slovenska Cesta near the city center, It was designed by Czech architect František Krasny and built in the early 1920s, but the four telamones were sculpted by Franc Berneker, universally regarded as the first and best modern Slovenian sculptor. There’s also a hiking/biking path in Pohorje mountains of north central Slovenia that bears his name.