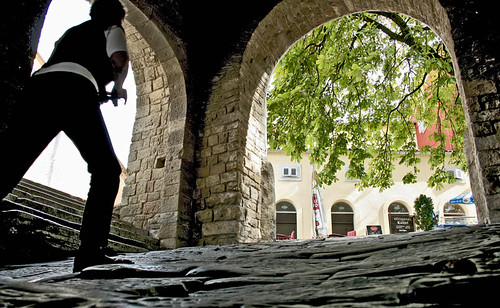 When you’re bopping through Croatia’s Istria peninsula, don’t forget to look inwards. Inland that is.

Smack dab in the center of Istra is the village of Motovun (population 400 and decreasing rapidly), a spectacular hilltop medieval settlement (elevation 270m /885 ft) affording sensational views of the Mirna river valley and mountains both near and far. The city walls date back to the 12th C., and the impressive city gate to the 15th when it was called Montona D’Istria. There’s simply no place like it in this area. 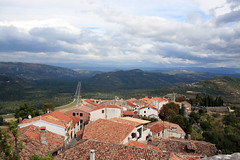 Istria figures prominently in the Croatian Tourism Board’s international PR campaign; part of that is for the region’s food and wine. The wine offerings are topped by Malvasia (Malvazija) and Teran (Carso Terrano) which both do quite well on both sides of the Slovenia-Croatia border. (In general terms, Malvasia is probably better on the Croatian side, Teran better on the Slovenian.) Local goat cheeses and olive oils are fabulous and bountiful, but perhaps the biggest culinary lure –certainly the most expensive– are the white and black truffles that are plentiful (if you know where to look) in the forests nearby.

The rapidly dwindling population is leading to serious problems for the hilltop community. Outside the main tourist season the village is virtually empty, with basic services beginning to disappear, and the infrastructure deteriorating. Current development plans, calling for the construction of polo grounds and a golf course and vacation villas for several hundred residents, are hotly debated. [More from the NGO Motovun Eco Town.]

An absolute must day trip if you’re in the area, and there’s plenty of interest to warrant spending a night or two in the area. The town also hosts a film festival each summer.

Wine: I bought one bottle, Kozlovic Othello 2003. Why? It’s a red blend (70% Teran, 15% Cabernet Sauvignon, 15% Merlot) and at 146 HRK (20 EUR/28 USD), it was the most expensive on the shelf of a delightful gift shop/local museum. That’ll tell me one of two things: it’s either a little-known bargain at that price, or, an overpriced offering targeted at day trippers and I was stupid enough to buy. I’ll let you know. Soon, I think.