10 Reasons Why Sarah Palin Shouldn’t Give a Press Conference Before Nov. 4 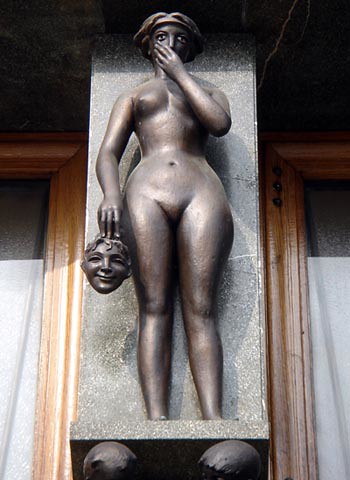 I can’t think of one. Can anyone? Please, just one?

Would the far-right base the she was selected to appease not demand the same if the Democrats had selected a virtual unknown as the second in command, someone who in their few media appearances has only shown how clearly out their league they are? Plenty of conservatives have, and clearly aren’t impressed.

Picking up on The Daily Dish‘s call, Christopher Hitchens writes in Speak Up! Stop covering Palin until she gives a press conference that without a forum in which to raise her dubious nonsense from the campaign trail, that

continued media coverage of her appearances is no better than lending a megaphone to a demagogue, the better to amplify her propaganda.

Gov. Palin, stop hiding. You want to be Vice President, and you think you’re up for the No. 1 spot as well. Hiding isn’t very presidential.

Perhaps the worst mistake McCain made in his campaign for the White House was the choice of the inexperienced and inflammatory Palin as his vice-presidential running mate.

Indeed, the presidential campaign has rendered McCain nearly unrecognizable. His selection of Sarah Palin as his running mate was, as a short-term political tactic, brilliant. It was also irresponsible, as Palin is the most unqualified vice presidential nominee of a major party in living memory. The decision calls into question just what kind of thinking — if that’s the appropriate word — would drive the White House in a McCain presidency. Fortunately, the public has shown more discernment, and the early enthusiasm for Palin has given way to national ridicule of her candidacy and McCain’s judgment.

And we find no way to square his professed passion for America’s national security with his choice of a running mate who, no matter what her other strengths, is not prepared to be commander in chief.

His selection of Alaska Gov. Sarah Palin as his running mate was stunning. She is shockingly lacking in presidential qualifications. Some of Sen. McCain’s most enthusiastic supporters have been forced to admit this. Her defenders say her resume compares well with Sen. Obama’s, but it does not.

Despite his age and previous health problems, McCain chose a vice presidential candidate who is so clearly unqualified for high office that the thought of her stepping into the presidency is frightening. That irresponsible decision casts serious doubt on McCain’s judgment at this point in his political career. And over the past eight years, Americans have come to know, all too well, the high price of carelessness and ineptitude in the White House.

Most egregiously for a man of advanced age who knew how important this decision could be, he chose the unqualified Gov. Sarah Palin to be his vice president.

McCain’s running mate, Alaska Gov. Sarah Palin, has been largely sequestered from the news media since her selection in late August. She has yet to have anything resembling a traditional news conference, where the full range of her knowledge and views can be explored. Her avoidance of questions and reliance on cue-card talking points in the one vice presidential debate did nothing to allay doubts about whether the 44-year-old governor of two years is capable of assuming the reins of the presidency. Her selection was but an act of political calculation by McCain.

And the Chicago Tribune, in its first-ever endorsement of a Democrat for president in its 161 year history:

McCain failed in his most important executive decision. Give him credit for choosing a female running mate–but he passed up any number of supremely qualified Republican women who could have served. Having called Obama not ready to lead, McCain chose Alaska Gov. Sarah Palin. His campaign has tried to stage-manage Palin’s exposure to the public. But it’s clear she is not prepared to step in at a moment’s notice and serve as president. McCain put his campaign before his country.