Last Tuesday, The Guardian reported that the incoming president of The Maldives will implement a plan through which a portion of the Islands’ tourism revenue will be diverted into a fund set aside for the purchase of a new homeland should the archipelago disappear because of global warming. The threat is obvious, real, and immediate. Not counting the palm trees that line the beaches of the popular getaway, the highest point on The Maldives is just 2.4m (just under 8 feet) above sea level, with most of the land swimming just 1.5m (about 5 ft) above the surface of the Indian Ocean. According to the UN, oceans are expected to rise another 59 cm (about 2 feet) by the end of this century. Said president elect Mohamed Nasheed:

It felt a little jarring reading that while sitting at a port-side café on an island. It’s not that Syros, the administrative center for the Cyclades, is in danger of sinking any time soon. This 85 sq km chunk of rock, already a submerged mountain peak, is primarily hilly, ascents that begin as little as 100 meters inland from the point where you step off the ship that ferried you here. But looking out towards the horizon over the Aegean, you can get at least a modest sense of that isolating desperation Nasheed hopes to prepare for. Outside of the relative bustle of Ermoupoli, the off season melancholy here further underscores that isolation.

[For more on the 41-year-old Nasheed, the first democratically-elected president of this Moslem country, who was jailed 23 times, tortured and locked in solitary confinement for 18 months by the man he is succeeding, try here. The Economist also has more on his land-buying scheme.]

The preferred British term is out of season, a notion that to my ear suggests hard-to-get fruit or the ab 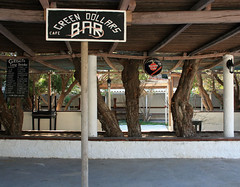 sence of freshly-picked vegetables. Not the presently shuttered hotels that line the tiny beaches here, and the closed bars and tavernas that line the narrow streets and alleyways en route to those in-season shelters. The colors, shades of off green and various hues of brown, are out of season. The relaxed, carefree faces of the locals, those walking home from a small grocery store, those patching a broken window, those sweeping leaves from their courtyards or picking up their children at bus stops, are off season. 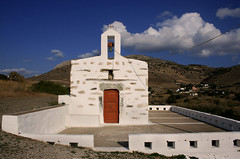 Off season has its distinct charm. (If you like to avoid crowds, it’s the perfect time to visit and roam.) Save a few small convenience stores, everything’s closed, and as cliché as it sounds, time does tend to stand still. Besides a stray cat or perhaps a local out for a stroll, the beaches are yours. Just a few kilometers out of Ermoupoli, the roads will be mainly yours as well.

The village of Gallisas, on the opposite side of the island from Ermoupoli, is among the have-to stops. The south edge of the picturesque Gallisas Bay is divided by a hill; on one side is the attractive tranquil eponymous inlet and on the other is Armeo Beach (pic at top), set aside for nudists. Perched atop the hill and looking down over both sides is Ayia Pakou, The Church of the Holy Submission. Remains of on old Akropolis have been found here. You can reach Armeo –by far the nicest beach on the island, and I did investigate virtually all of them– by walking up the hill and descending near the church, or you can walk around the hill along a marginally marked path. It’s not a difficult walk, but some careful climbing is involved. A hike up the hill to the south of Armeo, with a bountiful carpet of wildflowers, is worth the effort as well.

Poseidonia, or Dellagrazia, with its well-maintained villas and manor houses, is perhaps the island’s most charming village. Kini, exactly due west of Ermoupoli, affords nice westward views towards Kythnos and Kea. Overlooking the Bay of Kini is the Ayia Varvara (St. Barbara) Monastery. Kini has its own beach, but a nicer spot is at Delfini Bay, a short drive along a dirt road from Kini. Nice westward views from a hilltop road here as well.

It’s off season, so it’s impossible to gauge precisely how busy the beaches at Syros are during the summer months; according to locals the island isn’t nearly as overrun as the more popular islands, an aspect that certainly has an appeal of its own. 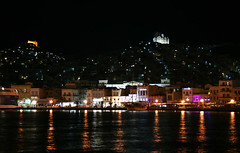 As the region’s capital and with its busy port, Ermoupoli (Hermoupolis) never seems to be out of season. It’s a clean, pleasant, and lively town of some 13,000, defined by its neoclassical, and primarily western European, architecture. Until 1860, its port was more important than its mainland brother at Piraeus. There’s a thriving café culture, and enough museums, galleries, shops and clubs in which to while away the time. The narrow streets of cobblestone and marble are fun to explore. Overall, Certainly worth more than a day trip.

– It’s not particularly difficult to casually comb over the entire island –in all, about 22 km long– over the course of a late morning and afternoon. Cars and motorbikes are available from a slew of travel offices along the port. I negotiated and picked up a car for 20 EUR for the day, certainly the most laid back rental transaction I’ve ever experienced. It’s a no-brainer but I’ll say it anyway: once outside of Ermoupoli, the roads are extremely narrow at times. In some cases, it’s impossible to tell the difference between a road and a driveway.

– Several other lines besides the BlueStar operate to/from here. I returned via the Hellenic Seaways Nissos Chios –the only early afternoon departure back to Piraeus– which was a much nicer and more comfortable ferry than the BlueStar’s SuperFerry II. 28 EUR.