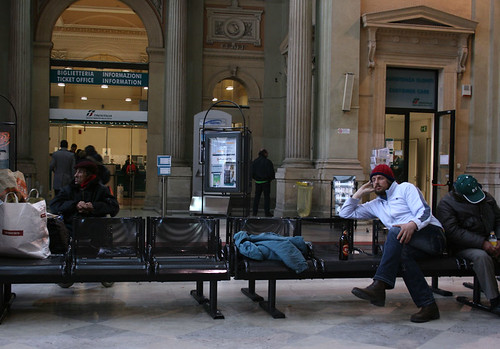 On an early summer morning in 2003, I spotted a copy of Jan Morris’s Trieste and the Meaning of Nowhere in the bookshop of the Newcastle train station. I was heading to Trieste in a very roundabout sort of way, due to arrive at 2:05 am the next morning. I bought it and spent the rest of the day –on trains, in small airport lounges and uncomfortable budget carrier planes– reading her fascinating memoir of the once mighty northern Adriatic port city, one she had often characterized as her favorite. There was a strong sense of melancholy exuding from the pages; there was simply no other way for Morris to remember a city that history had since chosen to relegate to the sidelines, one that is now simply trying to live out its uselessness.

Just as I finished, two whistle stops from the Centrale station, I experienced part of what she was talking about. Without explanation or warning, the train came to a halt and we were told to step off and travel the remaining 28 kilometers by bus. By the time I arrived at the station she so vividly described, I was an hour-and-a-half behind schedule, missed my ride to Portoroz just across the border in Slovenia, and was forced spend the next four hours trying to explain –no, not justify– the George W. Bush doctrine to a stoned and hysterically giggling French-speaking spitting image of Bob Marley who was out walking his unkempt scrawny mutt. I had arrived in Nowhere.

But much has changed in those ensuing five years. At least as far as the station is concerned. I used it regularly during the year I lived in Piran, and while hints of its past glory were evident, you had to look well beyond the grit to find them. It’s gotten a complete makeover since; the main entry looks terrific, there are a few new shops, a large airy cafe, and a very convenient grocery store. Morris would probably approve.

Related: The €100 million renovation at the massive Milano Centrale, my favorite Italian station, continues. The new moving sidewalks/escalators are finished and functioning, and new artworks –one-fifth of the total budget was earmarked to restore “areas of high artistic value”– appear during every lay over. No word on completion date.