Here are a few shots taken during a relatively brief stop in Nghia Lo (Nghĩa Lộ) in Vietnam’s Yen Bai Province. I got my first street shave here, too. 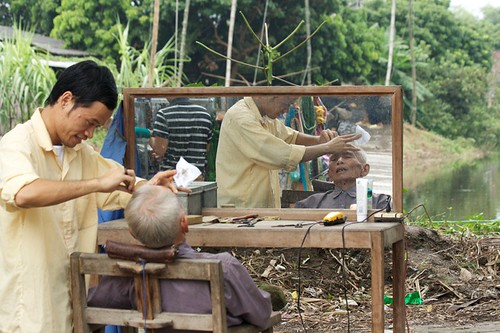 Nghia Lo is just over 200 kilometers from Hanoi, a leisurely seven-hour trip on a two-lane highway, including plenty of stops. The first two-and-a-half hours meandered through the Red River Delta northwest from the capital; from then on, the terrain turned hilly and then mountainous until reaching the center of the valley.

A fairly sleepy town of about 25,000, Nghia Lo rests in the center of the Muong Lo Valley, the second largest in Vietnam’s northwest after the Muong Thanh Valley which is home to the better known Dien Bien Phu. But Nghia Lo was also the site of two key battles in the IndoChina Wars. In the first, in October 1951, the French managed to repel the Viet Minh from the area, disrupting their supply lines to the north. 3500 Vietminh and over 600 French were killed. Almost exactly a year later the Viet Minh took control. For good. The battles are still very much remembered. I visited on the 19th of October; one man I spoke to told me of a local celebration he attended the day before commemorating the victory.

Besides a stroll down its market street, there isn’t much to do in the town itself, but it’s a good stopping point on the road that leads further north through the amazing Tu Le Valley and the Hoang Lien Son mountain range to Sapa, and for visits to local ethnic communities. (More specifically on these another time).

The area around Nghia Lo is home to several of Vietnam’s ethnic groups, the Thai, Black Thai, White Thai, Tay and H’Mong among them. My guide Duc did a terrific job of identifying them for me and explaining the subtle differences, but I didn’t do a very good job of writing everything down. I would be most appreciate to any and all who can help identify the groups these women belong to. Thanks!