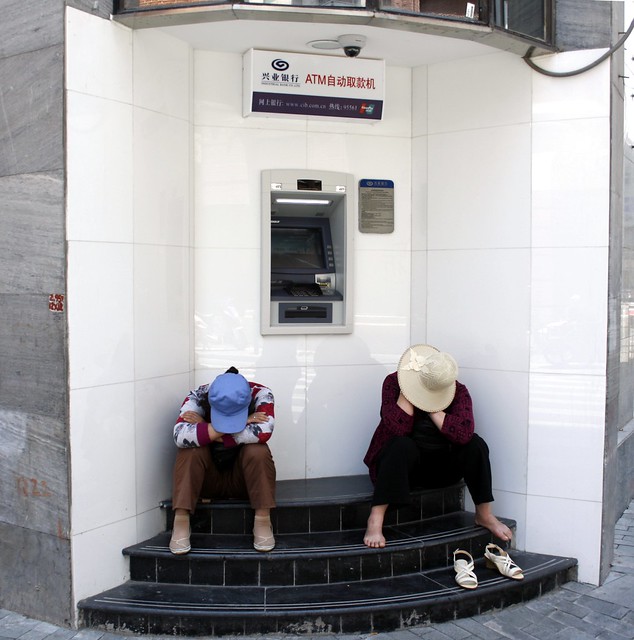 Even folks in China get tired of buying all the things they make.

This was taken in Shanghai last May during one of two trips I made to China last year and I remain utterly fascinated.

Barack Obama and Chinese President Hu Jintao met today in Washington which will keep the talking heads busy for the next few days. In the meantime, some links of interest I’ve read over the past few days – personal bookmarks:

China has lent more money to other developing countries over the past two years than the World Bank, a stark indication of the scale of Beijing’s economic reach and its drive to secure natural resources.

China Development Bank and China Export-Import Bank signed loans of at least $110bn (£70bn) to other developing country governments and companies in 2009 and 2010, according to Financial Times research. The equivalent arms of the World Bank made loan commitments of $100.3bn from mid-2008 to mid-2010, itself a record amount of lending in response to the financial crisis.

From The Guardian (19-Jan-2011), China’s tentative steps towards democracy:

Yet when it comes to the subject of representative democracy in China, numerous sinologists continue to say, “Don’t hold your breath.” But the notion may not be as far-fetched – or as far off – as the cynics believe. For example, most westerners will be surprised to learn that China already holds more elections than any other nation in the world. Under the Organic Law of the Village Committees, all of China’s approximately 1 million villages – home to some 600 million voters – hold elections every three years for local village committees.

Critics scoff at these elections and say they are manipulated by local Communist party officials. But Robert Benewick, a research professor at the University of Sussex, says that village elections have been growing more competitive, with more independent candidates and use of the secret ballot becoming more common. For those elections where there has been real competition, researchers claim to have evidence of positive impacts.

The studio would have stood at the heart of an embryonic arts cluster on the outskirts of Shanghai, a draw for luminaries from around the world.

Ai Weiwei standing in the rubble of his studio in Shanghai on Tuesday. He has come to see his conflict with government officials as performance art.

It took two years to build, and one day to tear down.

An order to raze the studio — designed by Ai Weiwei, a protean artist who is one of the most outspoken critics of the Chinese Communist Party — was issued last July. Mr. Ai took the move to be retribution for rankling the authorities. He said officials told him that the demolition would not take place until after the first day of the Year of the Rabbit, which falls on Feb. 3.

Boeing Co. secured a 200 commercial aircraft order from China worth $19 billion on Wednesday, helping the manufacturer head off market gains by its European rival Airbus.

The three-year deal followed a long period of negotiations between the U.S., Boeing and China that likely included offsets, such as an agreement to purchase certain goods or services from the buyer, or to directly invest in the country’s economy.

Aided by at least $43 million in assistance from the government of Massachusetts and an innovative solar energy technology, Evergreen Solar emerged in the last three years as the third-largest maker of solar panels in the United States.

But now the company is closing its main American factory, laying off the 800 workers by the end of March and shifting production to a joint venture with a Chinese company in central China. Evergreen cited the much higher government support available in China.

I’ve got plenty of pics from China on my flickr stream: Shanghai, Beijing, and Nanning. Check ’em out!

A time lapse experiment (LJ Pics of the Day)

The Slipper Has Disinfected

The Path to Happiness, Shanghai

The Slipper Has Disinfected

China is world’s worst jailer of the press; global…