This is a series of 124 quick snaps of or from a hotel room/road office with which I decided to try out the free service Pummelvision that I stumbled upon about a month ago. And I’m glad I did since I just found out, while typing this post, that they retired their project six days ago.  RIP. And THANK YOU.

My routine while on the road has evolved to include a quick snapshot of my hotel room promptly upon arrival. I don’t always succeed and have probably missed a few dozen over the past few years. Viewed separately they’re pretty mundane. Viewed fairly quickly as a whole they become slightly less mundane. All taken from 2007-2011.

Among my favorites is the view of the Acropolis from the rooftop bar of the Hotel Attalos in Athens. [A 30-second review I wrote back in 2008 is here]. If you’re looking for a decent cheap hotel in the Greek capital, highly recommended. 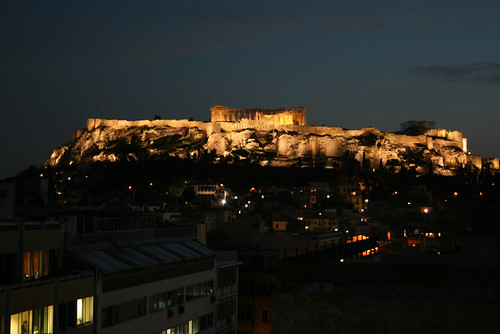