I’ve read Love in the Time of Cholera twice. It’s among my favorite books.

The first time was in the early winter of 1992, when I lived in a small one-room cabin in the woods near Athens, Ohio. At the time I was preparing for a road trip three friends and I were about to take, driving my friend Bob O’s 1975 International Harvester Scout from southern Ohio to Nicaragua. When he bought it for two hundred dollars six months before our late June departure date, it was barely running.

That winter also included research into and writing about a new cholera pandemic that began early the previous year in Peru and which was gradually creeping its way north towards Central America.

By June we were prepared with fully recharged immune systems. We had several booster shots, drank polio juice dispensed from the university clinic, and took our anti-malarials. On the road we were extremely careful with what we ate. We drank and brushed our teeth with only bottled water.

It hit me the next afternoon as we were approaching San Marcos de Colon, a Honduran town just eleven kilometers from the Nicaraguan border. We were running late, the border closed at five, so we were forced to spend the night. I could barely walk. Bob O dragged me a few blocks to a small privately operated clinic run by a young Brazilian doctor who, as it happened, was extensively involved in Honduras’ national anti-cholera campaign. And she wasn’t amused. I don’t recall her precise words, but they went something like this:

“I’ve been working my ass off to keep cholera out of this town and you greasy gringos bring it here.” 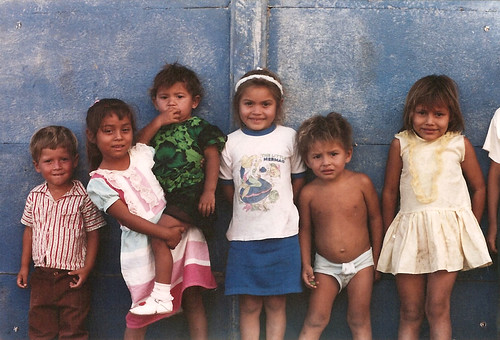 Cholera causes heavy and quick dehydration. It’s easily cured, but if not treated quickly, it can and does kill. It’s the worst form of diarrhea imaginable, unrelenting. The dizziness is profound, and I’ve never felt that parched or helpless.

We were quarantined for the next thirty-six hours, the first twenty of which where fairly unpleasant. The doctor immediately began treating us as if we had the bacteria swimming inside us, but we still had to provide samples which would be sent to the health institute’s main lab in the capital Tegucigalpa.

We were laying on brand new cholera beds, the kind with pre-cut holes designed to fit virtually any ass size, when she handed us small glass containers. They reminded me of baby food jars. “Here,” she said.

When you’ve lost all control of that bodily function, capturing your own spouting fountain of cholera juice in a recycled baby food jar isn’t easy. It’s also a mess. I really don’t wish it upon anyone. Not even George W. Bush.

We were also advised to not, under any circumstances, tell anyone that we contracted cholera – not in Honduras, not in Nicaragua. The campaigns were effective, the doctor told us, but they’ve also spread considerable fear. People would flood the clinics demanding medicines. Terrified mobs could form to run us out of town.

“This has happened,” she said.

During our unintended stay, we met Mary, a Texan who was born-again a dozen years earlier and who had been coming to San Marcos for the past nine years to help with the clinic.

“I heard there were some sick communists in town,” she said, after storming into our room to introduce herself. I wasn’t feeling particularly talkative.

“Who are you and what the fuck are you doing here?” was all I could manage.

She smiled. “Every American who passes through here is a communist. But that’s okay. Jesus will forgive you.”

I wanted to tell her that Jesus was a communist but I was too distracted with positioning myself just right over the hole in the bed.

Over the next few days she rambled on about lots of things, among them, that a capful of Clorox bleach can cure just about everything. Her anti-communist rants were particularly amusing.

“Seventy percent of Mexico is communist,” she said. “Most of Guatemala and El Salvador, half of Honduras.”

For the rest of the summer we called her The Church Lady. We didn’t see eye-to-eye on one thing, but I did grow to like her. We had conversations fun enough to make my vomiting and diarrhea slightly less unbearable. She later inspired haiku. I jotted quite a few of them into my notebooks. Here’s one:

With lots of time to kill, we tracked down the root of our affliction to a small roadside restaurant in the mountains just south of Guatemala City. Breyer and I each had a salad which was obviously washed in contaminated water. Bob O and Jeannine did not.

Bob O’s car got us there, but it never left Nicaragua. He decided to sell it to a friend, Pedro, a former contra squad leader who would later become mayor of Teustepe, our sister city.

One afternoon, Pedro and some friends drove into the countryside for what I think was to be a hunting trip. Along the way a spark ignited and the car, loaded with guns and ammo, exploded. No one was hurt. 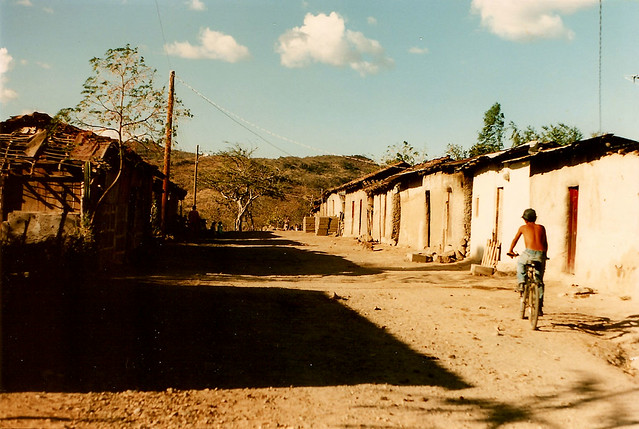 I traveled overland on my way back north that summer –the other three chose to fly– selecting slightly different routes. Hoping to at least partly avoid the mass confusion, delays and bribes inherent in each border crossing, I chose a less-traveled one from Nicaragua back into Honduras via Esteli and Ocotal.

I got up early, hopped on a pre-dawn bus, and was first in line when the Nicaraguans opened their side of the border at 8 a.m. Soon after waving good bye, I walked the four hundred or so meters to the Honduran gate, which wouldn’t be open until 9. So I spent an hour, with no shade, sitting on the thick line you see separating countries on maps.

At Vič Cemetery – LJ Pic of the Day

Waiting for a Storm – LJ Pic of the Day