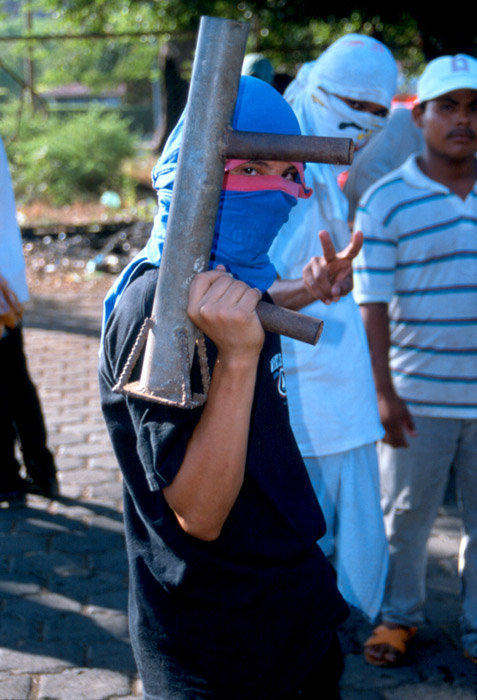 The WordPress Weekly Photo Challenge theme this week is Fleeting Moment, like the one during which I made eye contact with this student demonstrator in Managua, back in April 1999. He’s holding a mortero, kind of a homemade M-80 launcher. They’re mainly used to make a very loud noise. They succeed with great effect.

These particular demonstrations were organized each April since the beginning of the 1990s to protest proposed cuts to university funding budgets. As far as I know they were still going on as recently as 2009. The Nicaraguan constitution mandates that six percent of the federal budget go towards higher education. Each year through the 1990s there was a threat to reduce it, thus the protests.

A student was killed by the police the day before so there was some tension – and plenty of tear gas. This was taken later in the day; earlier I ran when tear gas began flying in my direction, a reaction that provoked laughter from a student who was helping me as an interpreter.

“Why are you running, silly, crazy gringo?”

I always thought that crossing paths with tear gas usually signaled a good reason to run.

Along the margins, on both sides of the street, kids stood by ready to sell bottled water to anyone who was gassed. I didn’t need any because I ran.